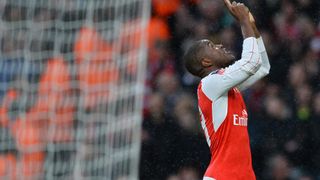 Arsenal forward Joel Campbell has proved he can produce under pressure and when his team need him, manager Arsene Wenger said.

The Costa Rica international was sent out on loan to numerous clubs to start his Arsenal career, but has settled into a more regular role this season.

Wenger said he never doubted the 23-year-old's attitude, however, he still needed convincing.

The Frenchman pointed to Arsenal's 3-0 Champions League win at Olympiacos in December as one of the moments Campbell proved he could perform for Arsenal.

"I hope so. I thought always the attitude was there. But after Olympiacos, in a game where we were knife on the throat, he turned up with something special," Wenger said.

"Then I thought, 'He can play under pressure as well, which is important for us'."

Campbell has made 18 appearances in all competitions this season, scoring three goals and providing two assists.

Wenger said he was somewhat shocked by Campbell's talent.

“You want to be surprised by the quality of your players and where he surprises you is in the intensity of this teamwork," he said.

"What is very interesting in Campbell's case is that he looks like he has gained more confidence and authority in his game and in the final third he is a dangerous player and he has shown that.