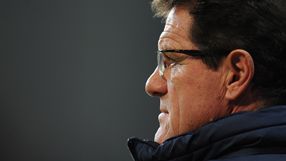 The Italian claims that the Manchester United defender did not come to meet him when he visited Old Trafford for a Champions League clash against Marseille earlier in the month.

Capello said: “It didn’t happen, he didn’t come. He didn’t come. I tried to meet him [Ferdinand] when Manchester United played against Marseille but he told me no.

‘I can understand everything, but I need to make decisions. I think I will be happy and will meet him in the future.”

Capello admitted that the situation could have been handled better but has defended his decision to reinstate Terry as captain, claiming his mind was made up after the armband changed hands on several occasions during the friendly against Denmark in February.

He said: “Look, it could have been done something better but it is the past. I respect the players, I respect all the people and sometimes I regret what really happened, but it’s possible to do something better.

“Something happened in my mind when I saw the armband being passed around during our game in Copenhagen.

“We changed it in the second half and it was unfair for John Terry to see this.”

And Capello is adamant he has made the right decision.

“I thought that it was time for John Terry, after punishment, to return and be captain,” he stated.

“I know that Rio Ferdinand and Steven Gerrard are not fit. I knew it was the moment, with one game which is so important, to have one captain like John Terry.