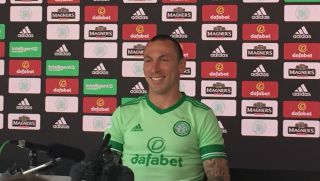 Scottish Premiership clubs voted to increase the number of replacements from three to five during the new campaign, which starts on Saturday.

SPFL chief executive Neil Doncaster stated that the move was to help ease the “additional strain” on players.

Ahead of the Premiership opener against Hamilton at Parkhead on Sunday, where the Hoops will begin their quest for a 10th successive title, Brown gave his approval to the dugout change.

The veteran midfielder said: “We have a great squad and we will use it very wisely.

“We have looked at our bench in the past and you could bring on four, five or six players and now we have the option to bring in five out of nine.

Manager Neil Lennon admits the new rule will not do the Scottish champions any harm.

He said: “It may be beneficial.

“You are allowed to name nine subs now and if you look at the programme going into the first half of the season, it is going to be very, very heavy.

“So I think that’s a good thing in terms of being able to rotate the squad a little bit more and it will be the same for all the other clubs, especially clubs with smaller squads, the physical burden on them will be eased a little bit with that decision.”