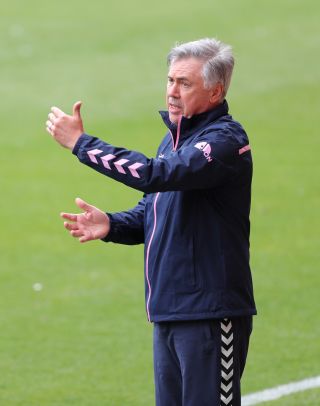 Everton manager Carlo Ancelotti has set his players the minimum target of qualifying for Europe this season.

The three-time Champions League-winning coach saw his side limp to 12th last season – their worst finish since coming 17th in 2004 – after a promising upturn following his appointment in December faded with just three wins across their final 12 matches.

That was a major disappointment for Italian serial winner, who harboured outside ambitions of sneaking into the European places despite taking over a team in a relegation battle.

“I think that the goal we want to achieve is to fight for the first positions of the Premier League to be able to reach Europe next season. The goal is quite clear,” he said.

“We have this desire, this ambition. I think we can.”

This summer Ancelotti has moved to rectify the major problem area of midfield with the signings of Napoli’s Brazil international Allan, Watford’s Abdoulaye Doucoure and high-profile Colombia playmaker James Rodriguez.

He still needs more cover at centre-back as Yerry Mina has been hampered by niggling injuries since his arrival two years ago while there remain question marks around whether his striking options of Richarlison, Dominic Calvert-Lewin and Moise Kean can provide the necessary number of goals to fire them high enough in the table.

Nevertheless, Ancelotti is satisfied with their transfer activity so far, with all three new signings set to be given their debuts at Tottenham on Sunday.

“I think that we are happy to have these players,” he added.

“The club did a fantastic job because these players – James, Doucoure and Allan – were the priority for us.

“We were able to sign them and so we’re really happy, I think the club did a fantastic job.

“Now we are working to have a good season, we would like to be competitive in all the competitions and I think with these players the squad has improved and I think we are going to compete.

“The market is going to be closed on October 5, if there is some opportunity I think we can look for this (more signings), but honestly I am satisfied with the squad in this moment.”

Former defender Leighton Baines has returned to the club in a coaching role following his retirement at the end of last season.

The left-back has been appointed the club’s first professional development coach working with young first-team players as well as the under-23s and under-18s.

“I’m really pleased to be back and to be part of this exciting new structure,” said Baines.

“While our development pathway is already highly respected, it has been very clear to me that there is a shared ambition here to develop and improve this even further, and I’m hugely excited to have the opportunity to play a part in this.”

Another former player David Unsworth has had his role extended to incorporate director of academy along with his under-23 coaching position.

“David’s credentials as a coach are first-class and we all know this is matched by his passion for the club,” said director of football Marcel Brands.

“Adding Leighton and his knowledge into that structure will be very valuable to us.

“He is taking up a new and important role which he has helped design based on his recent perspective and tremendous experience as a player.”