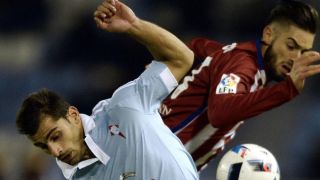 A frustrating performance saw Atletico Madrid held to a disappointing 0-0 draw at the hands of Celta Vigo in the first leg of their Copa del Rey quarter-final on Wednesday.

Having earned a 2-0 La Liga win at the Estadio de Balaidos earlier this month, Atletico found life harder this time around, with the hosts enjoying the better of a tightly contested first half.

Jackson Martinez came closest to breaking the deadlock by diverting an early chance over, while Iago Aspas saw a vicious effort parried away by goalkeeper Miguel Angel Moya moments later.

Martinez came close again just after the break, but Liga leaders Atletico, who made five changes from the win over Las Palmas at the weekend, largely struggled to break down a spirited home defence. And Celta were unfortunate not to take a slender leader when Gabi cleared off the line following Augusto Matias Fernandez's error eight minutes from time.

Despite their lacklustre showing, Diego Simeone's men will nevertheless be confident of progressing heading into the second leg at the Vicente Calderon, having won their last nine home games in all competitions.

Eduardo Berizzo, though, will be encouraged by his side's performance as Celta look to reach their first semi-final spot in 15 years.

A typically high-tempo start from Atletico was nearly rewarded inside five minutes as Martinez – on his return to the starting line-up - poked a low Filipe Luis cross over from eight yards.

Celta responded to that early scare just a minute later, with Moya beating away a strong Aspas drive following a neat one-two with John Guidetti.

The hosts, still missing talismanic forward Nolito, grew in confidence, but laboured to test an Atletico backline that had previously been breached just once in six league and cup outings.

Moya had to be alert on 28 minutes to prevent Pedro Pablo Hernandez connecting with Jonathan Castro's low cross as Celta continued to probe, while Gabi's speculative 30-yard effort nine minutes later was as close as Simeone's men came to mustering a response.

Celta were nearly made to pay for their attacking impotence three minutes after the break, with goalkeeper Ruben Blanco producing a fine save to turn Martinez's curled strike round the post.

A drilled effort from Aspas on the edge of the area was well gathered by Moya as Celta continued to ask questions of their opponents, before Atletico substitute Angel Correa powered a header over two minutes later.

Atletico's top scorer Antoine Griezmann, who found the net the last time the two sides met, saw a below-par performance result in him being replaced 10 minutes from time

And a frustrating shift was nearly made worse when a mistake from Fernandez almost resulted in an own goal, only for Gabi to hook it away after his team-mate had deflected it past Moya as he rushed off his line.