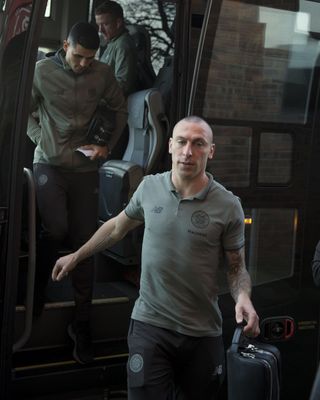 Celtic skipper Scott Brown’s stunningly-successful career will be immortalised on DVD but he insists he is far from finished.

The midfielder signed for the Parkhead club from Hibernian in 2007 for a reported £4.4million, a record fee between two Scottish clubs.

With one League Cup winners medal in his pocket from his time at Easter Road, Brown has amassed a further 19 winners medals with the Hoops, including the last nine trophies in Scotland.

The 34-year-old was speaking at Celtic’s Lennoxtown training complex at the launch of ‘Broony’ a DVD tribute to Brown and ahead of the visit of St Mirren on Wednesday night, he said: “I just take it as game-by-game.

“As long as I’m feeling good and training well, and as long as the manager picks me, I’m happy.

“The main thing for me is being as fit as I can be over the next couple of seasons.

“As long as we’re winning, it puts a smile on my face.

“The big thing is performance levels and the way we entertain at home.

“It’s been phenomenal the past three years as well – winning the Treble Treble – and hopefully there’s a couple of years left in me and hopefully a few more trophies as well.

“If we can add to that it’ll be amazing. I just keep going season-by-season and hopefully we do well.

“We’ve had a great start to the league so far and we’re doing well in the Europa League too.”