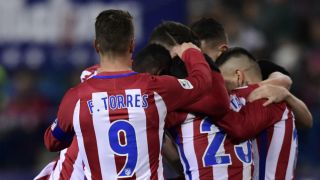 Assistant coach German Burgos was pleased to see Alessio Cerci warmly welcomed back into the Atletico Madrid fold as his team-mates enjoyed a comfortable Copa del Rey win over Guijuelo.

Cerci was introduced as a second-half substitute with Diego Simeone's men 4-0 up and 10-0 to the good on aggregate against their third-tier opponents, who would gain a measure of consolation through Antonio Pino's late header.

The Italy winger last featured for Atletico in December 2014 having failed to make a single LaLiga start on the back of joining from Torino earlier that year.

Subsequent loan spells at Milan and Genoa followed by a knee injury ruining the first half of this season have cast him as the forgotten man, but his every touch was cheered at the Vicente Calderon on Tuesday after first-half goals from Nico Gaitan, Angel Correa, Juanfran and Fernando Torres turned the remainder of the match into a procession.

"He is a great player, people appreciate him," said Burgos at a post-match news conference after Simeone made a speedy getaway to catch a flight back to his native Argentina, according to reports by Mundo Deportivo.

"He was cheered every ball he touched and is available to this team."

Boasting a 6-0 lead from the first leg, Simeone took further opportunities to experiment, with full-back Juanfran making his rare goalscoring contribution from midfield and defender Jose Gimenez switching to an unfamiliar holding role during the match.

"They did well," Burgos said.  "We tried some different positions - the important thing was to have minutes for [those who] play less.

"The fact of changing the positions of several players is that they are seeing other positions."

Atletico lie sixth in LaLiga, six points behind second-place Barcelona and resume against Eibar after the mid-season break.