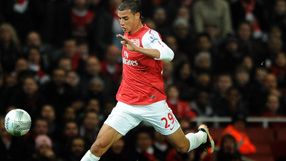 The 28-year-old move to the Emirates Stadium on a free in 2010 after an impressive career with Ligue 1 side Bordeaux, netting 76 goals in 301 appearances during his eight years in France.

However, the Moroccan has failed to make the desired impact following his move across the channel and has found the back of the net just once this season during the 4-3 defeat at the hands of Blackburn Rovers back in September.

Germany international Lukas Podolski has been heavily linked with a move to Arsenal leading to speculation linking Chamakh with a move away from North London.

But after speaking to manager Arsene Wenger, the striker is keen to remain with the club after receiving reassurances from the Frenchman regarding his future.

"I’ve spoken to Arsene Wenger and I’m not leaving for now," he told said.

"He trusts my work and I’ll still have chances in the first team so I’ll stay.

"I left Bordeaux to improve as a player and I can contribute here."

Reports have linked the striker with a move back to France, with former club Bordeaux and PSG both linked with a £6million bid for Chamakh.

Yet, despite not playing since January, the Morocco international has told his agent to ward off any interest from potential suitors.

"My agents have been ordered to reject bids that come from other clubs because I want to prove I can be useful for Arsenal," he explained.