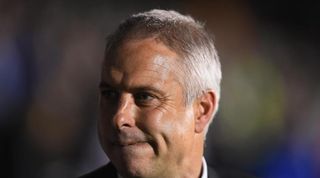 Symons has guided Fulham - relegated from the Premier League last term - to four wins in his six matches in charge after replacing the sacked Felix Magath.

The former Fulham player took over a side in crisis, with the Craven Cottage outfit losing seven of their first eight Championship matches and stranded at the bottom of the table.

And although Fulham still sit in the relegation zone, in 22nd, Saturday's 1-0 win over Norwich City - who led the league prior to their defeat - showed Symons' side are not likely to be in the bottom three for much longer.

That Norwich victory signalled the start of a hectic three-week period in which Fulham will play seven times, but midfielder Scott Parker sees it as an ideal chance to play catch-up on the rest of the league.

"We know how many games are in this league," Parker told Fulham's official YouTube channel.

"We now go into a period where there is a lot of games for us.

"We've started it with a good result…now we go Tuesday night, hopefully we can continue that and get up the league."

Rotherham also enter the New York Stadium clash on the back of a success, after they edged Leeds United 2-1 in a Yorkshire derby on Friday.

Cardiff City, Watford and Bolton Wanderers will be seeking to maintain the momentum gained by wins collected on managerial debuts.

Watford lead the league despite having four different managers in charge this season and new man Slavisa Jokanovic oversaw a 3-0 success against Sheffield Wednesday - the ideal boost ahead of a home clash against Nottingham Forest, who saw their unbeaten run end at Cardiff on Saturday.

Russell Slade masterminded that Cardiff win and will be looking for a repeat against the sixth-placed Ipswich Town, while Neil Lennon's Bolton, buoyed by their second triumph of the season, go to Charlton Athletic.

Charlton also tasted defeat for the first time in the league on Saturday when they lost 1-0 at Bournemouth.

Darko Milanic is still looking for his first win as Leeds coach and the pressure is starting to build, with Tuesday's trip to Norwich no easy task.

In the midst of all the Championship drama, Derby County are quietly going about their business and moved into second with a 3-0 win at Reading on Saturday. They will be firm favourites at rock-bottom Blackpool.

Millwall came from three goals down to salvage a 3-3 draw against Wolves on Saturday and visit Wigan Athletic next.