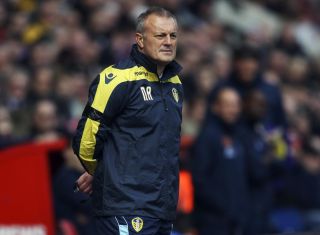 Redfearn took over as caretaker head coach at Elland Road on Thursday when head coach Dave Hockaday was sacked in the latest episode of the soap opera at the beleaguered Championship club.

Leeds owner Massimo Cellino came to Leeds with a reputation for wielding the axe and Hockaday was shown the door only two months after being appointed by the Italian.

Cellino revealed that he was on the verge of sacking Hockaday following last weekend's 4-1 Championship thrashing at Watford just two months after appointing him, but opted to keep faith with the former Forest Green boss.

A 2-1 defeat at local rivals Bradford City in the League Cup second round on Wednesday proved to be the final straw, though, with Leeds now having lost their last three matches in all competitions.

Redfearn took over as caretaker manager following the departures of Neil Warnock and Brian McDermott and the 49-year-old will be in charge again when Leeds face a Bolton side that have just one point from their first four Championship games.

Cellino will be hoping that Redfearn can go some way to lifting the gloom at Elland Road, with the club in turmoil yet again.

Fulham manager Felix Magath finds himself under pressure just a few weeks into the Championship season ahead of Saturday's clash with Cardiff City at Craven Cottage.

The vastly experienced German has endured a miserable start to life in the second tier following Fulham's relegation from the Premier League and last Saturday's 5-1 hammering at Derby County left the London club bottom still without a point.

Fulham did beat Brentford in the League Cup second round on Tuesday, with big-money signing Ross McCormack scoring his first goal for the club, and Magath will be desperate for that elusive first Championship win against Cardiff.

Nottingham Forest boss Stuart Pearce has no such problems and his league leaders travel to in-form Sheffield Wednesday eyeing a fourth successive win in all competitions, while second-placed Watford host managerless Huddersfield Town.

Lewis Grabban will aim to continue his impressive start to his Norwich City career against his former club Bournemouth, in-form Derby host Ipswich Town and Charlton Athletic make the trip to Brighton and Hove Albion.

Middlesbrough take on Reading at the Riverside Stadium, Millwall boss Ian Holloway comes up against his former club Blackpool at The Den, while Rotherham United host Brentford in a clash between two sides that were promoted from League One last season.

Wigan Athletic entertain Birmingham City and Blackburn Rovers travel to Wolves in the other games to be played on Saturday.