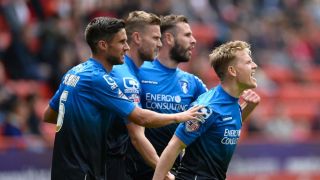 There was no shortage of drama on the final day of the regular season in the Championship, as Bournemouth pipped Watford to the title, Brentford and Ipswich Town took the final two play-off places, while Blackpool's match was abandoned.

It has been a season to remember for Watford, who guaranteed a return to the Premier League by defeating Brighton and Hove Albion last weekend, and it appeared as though they were going to beat Sheffield Wednesday to go up as champions.

Matej Vydra headed home a 25th-minute opener, but Atdhe Nuhiu's half-volley in stoppage time denied Watford at the last. The home supporters cared little, though, as fans flooded the pitch to celebrate promotion.

Subsequently, Bournemouth - who all but assured a spot in the top tier by beating Bolton Wanderers on Monday - went up as champions, with a 3-0 win at Charlton Athletic seeing them round off the campaign in style.

Matt Ritchie started and finished the scoring, while Harry Arter netted against the club he started his career with as Eddie Howe's men ended on top.

A very different type of drama unfolded at Bloomfield Road, where a second-half pitch invasion launched by Blackpool fans in protest at the Oyston family's running of the club led to the match against Huddersfield Town being abandoned.

Hundreds of fans were involved, settling in the centre circle and letting off flares, with their persistence eventually leading to the match being called off.

In the race for the play-offs there was heartbreak for Derby County, who had been in the top six since September, as a 3-0 defeat at home to Reading saw last season's play-off finalists miss out.

Brentford subsequently crept in on the last as they comfortably defeated relegated Wigan Athletic 3-0 at Griffin Park, with a semi-final against Middlesbrough - who drew 0-0 against Brighton - next up.

The other semi sees bitter rivals Ipswich and Norwich City meet, with the latter having lost 3-2 at Blackburn Rovers, while Alex Neil's men overcame Fulham 4-2.

There was agony for Wolves, who missed out on a play-spot on goal difference only. Nouha Dicko scored twice in an entertaining 4-2 win over Millwall, but it proved in vain for Kenny Jackett's side.

In other matches, Rotherham United manager Steve Evans promised to don a sombrero if his side stayed in the Championship and he was true to his word in a 0-0 draw against Leeds United at Elland Road, while Cardiff City won 2-1 at Nottingham Forest and Bolton were beaten 1-0 by Birmingham City.