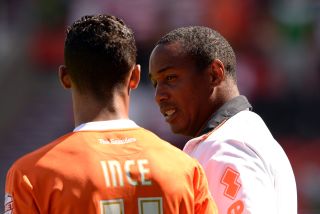 The Lancashire side now remain unbeaten in their first five games as an 81st-minute effort from Tom Ince won the match, despite the visitors boasting the better share of opportunities.

However, Paul Ince’s men still have Harry Redknapp's QPR breathing down their necks at the top of the table after they also clinched a 1-0 away win at Leeds United to mirror Blackpool’s start.

Clint Hill was the one to seal the points in the encounter at Elland Road with the defender scoring his first goal in two and a half years after tapping home a free-kick from Joey Barton 15 minutes from time.

It marked Leeds’ first loss of the new campaign , and there was similar disappointment for Nottingham Forest and Leicester with both also tasting defeat for the first time.

Goals from Jordi Gomez and Shaun Maloney helped Wigan Athletic sink Forest 2-1 at the DW Stadium, despite the away side going ahead through Andy Reid, while Leicester were hampered by Matty James' dismissal as they went down at Charlton Athletic.

The 22-year-old was sent off for a second bookable offence and there was added misery for his side as Yann Kermorgant, formerly of Leicester, scored the winner just eight minutes after he departed, to end the match 2-1.

However, Saturday’s action was more positive for Barnsley who clocked up a 2-1 win over Huddersfield, and Blackburn, who dispatched visitors Bolton 4-1.

There was also joy for Nigel Adkins at Reading, with his side bouncing back from a crippling 6-0 loss to Peterborough United in the League Cup midweek, to overcome Yeovil Town 1-0 at Huish Park.

It was not easy for the visitors though, with the home side dominating the chances before Adam Le Fondre fired home a penalty conceded by Luke Ayling with just over 10 minutes to go.

Although Reading may have had luck on side, the same cannot be said for Ipswich Town and Millwall who were both 1-0 up before letting in late goals from Birmingham City and Brighton and Hove Albion respectively in 1-1 draws.

The same result was also played out by Middlesbrough and Sheffield Wednesday at The Riverside, with the home side unable to grab a winner after Mustapha Carayol had equalised Michail Antonio's effort.

Elsewhere on Saturday, there were also victories for Burnley and Bournemouth with the former beating Derby County 3-0 and the latter overcoming Doncaster away from home 1-0.