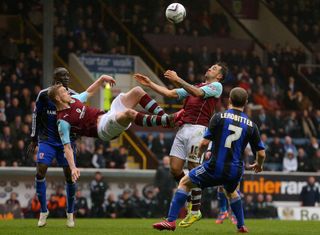 Sean Dyche's men began Saturday six points behind Leicester - who are already promoted and play Reading on Monday – but failed to close the gap on Nigel Pearson's side after suffering a 1-0 home defeat to Middlesbrough.

The hosts hit the woodwork twice in the first half before Jacob Butterfield scored the game's only goal in the 51st minute.

Goalkeeper Dimitrios Konstantopoulos was outstanding for the visitors, who had Daniel Ayala sent off in the dying stages.

Middlesbrough have now won four matches in a row, with the result helping them climb inside the top half of the table.

Brighton and Ipswich Town posted crucial wins in the hunt for a play-off place, with the former beating Charlton Athletic 3-0.

Jesse Lingard, Leonardo Ulloa and Jake Forster-Caskey were on target for Brighton, who leapfrogged Reading into sixth.

Derby County and QPR, in third and fourth but with little hope of earning automatic promotion, all but secured their play-off berths with big home wins.

Nedum Onuoha, Ravel Morrison and Bobby Zamora scored in the last six minutes as QPR beat out-of-form Nottingham Forest 5-2, while Derby came from behind to beat a nine-man Huddersfield Town 3-1.

Bournemouth's five-match winning streak ended in a 1-1 draw at Yeovil Town, who climbed off the bottom of the table as a result.

Barnsley now sit 24th after a 1-0 loss at Bolton Wanderers, with Jermaine Beckford's first-half strike the difference between the two sides.

Millwall remain in the relegation zone but are now just one point adrift of Charlton Athletic and safety after Martyn Woolford's 95th-minute strike saw them draw 2-2 against Watford.

Blackpool are just two points above the bottom three as Leeds United capped a week that saw Massimo Cellino officially take charge of the club with a 2-0 win at Elland Road.

And Atdhe Nuhiu also netted a double, with his second coming in the 95th minute as Sheffield Wednesday came from two goals down to claim a 3-3 home draw against Blackburn Rovers.