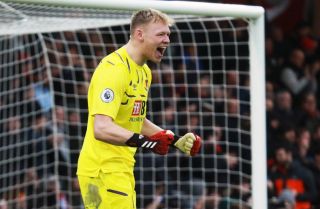 One of the few bright spots in a difficult season for Bournemouth has been the emergence of young goalkeeper Aaron Ramsdale.

While Eddie Howe’s side have been drawn into a relegation battle, and currently find themselves just inside the bottom three on goal difference, that hasn’t been for want of trying on Ramsdale’s part.

The 21-year-old, who was signed from Sheffield United back in 2017, made his Bournemouth debut on the opening day of the season and has been impressive so far.

His performances have attracted the interest of England manager Gareth Southgate, as well as a couple of the Premier League’s biggest clubs.

According to The Sun, Tottenham Hotspur and Chelsea see Ramsdale as a potential long-term solution to their goalkeeping troubles.

Hugo Lloris has suffered from injuries and made some high-profile errors, while Kepa Arrizabalaga was recently dropped by Frank Lampard after a patchy run of form, with Willy Caballero coming into the team.

Both Spurs and Chelsea are looking to address that situation in the summer and Ramsdale has emerged as a prime target.

Prior to this season, the youngster had spent time on loan at Chesterfield and AFC Wimbledon, gaining experience in the rough and tumble of the lower leagues.

He was instrumental to Wimbledon’s great escape last year, arriving in the January transfer window with the club well adrift at the bottom of the table only to make a remarkable late recovery.

A clean sheet on the final day helped to secure a goalless draw against Bradford City and another season of League One football for the Dons.

Ramsdale benefited from the experience of coming under siege at a struggling club and has coped admirably with the step up in quality against Premier League opponents.