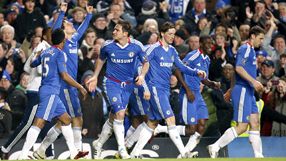 At half-time Chelsea trailed to Wayne Rooney's drilled shot and had been outplayed on their own turf by the team all set to steal their championship crown.

GEAR:Up to 7% off Chelsea home kits through Kitbag. Free delivery on orders over £50

United seemed to be heading for their first Stamford Bridge victory in nine years, a seven-point lead at the top of the Premier League and a massive 18-point lead over the reigning champions.

If they had lost, Carlo Ancelotti's side would have remained fifth and in danger of the unthinkable - missing out on a place in the Champions League for the first time since 2002.

Maybe that was in their minds as they set about the second half in a far livelier mood.

The safety-first passes that took all the momentum out of their attacks in the first half were replaced with balls into space and Chelsea's fans got behind them.

David Luiz leveled after 54 minutes and, after gradually forcing United back as they wrested control of the midfield, Frank Lampard's 79th-minute penalty won it.

Ancelotti accepted it was probably too little too late in terms of the title but, with the return leg of their last 16 Champions League tie against FC Copenhagen looming next week, it was a victory that will have given his players a real lift.

"It (the Premier League deficit) is too far but the victory was good for our confidence," he said.

Having spent much of the last four months bemoaning "bad moments" as his team slid down the league and out of the FA Cup, the Italian said Tuesday was "a good moment".

"We have to continue because every moment will be very important for the Premier League and the Champions League," added Ancelotti.

"The team showed good spirit. The players always stay together in the good moment and in the bad moment it is the same."

There were several encouraging aspects to Tuesday's comeback for Ancelotti. Luiz produced another assured display at centre-back and seems to have settled immediately into the hurly burly of the Premier League.

Lampard is, game by game, getting back towards the dominant figure he was before his lengthy injury layoff while midfield partner Ramires now looks comfortable in his new surroundings having looked like a rabbit in the headlights in his first few months at the club.

Didier Drogba, against all odds, does not appear to be sulking after again being left on the bench and he delivered a 30 minute cameo full of energy.

The one player who looked out of sorts was, again, Fernando Torres. The Spaniard certainly put the effort in but tracking back and closing down were not the attributes that earned him a transfer value of 50 million pounds.