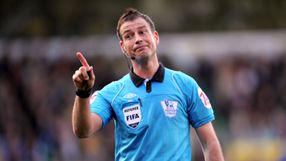 Leaders Chelsea's unbeaten start to the Premier League season came to an end when Javier Hernandez scored a dubious-looking 75th minute winner for United after Clattenburg had shown red cards to Chelsea's Branislav Ivanovic and Fernando Torres in quick succession in the final half-hour.

"We have lodged a complaint to the Premier League match delegate with regards to inappropriate language used by the referee and directed at two of our players in two separate incidents," a club spokesman told reporters.

"The match delegate will pass the complaint to the Football Association. We will make no further comment at this time."

The club would not name the players in question or of what nature the remarks were, but the spokesman refused to deny that John Obi Mikel had visited the referee's room after the game.

Mikel was booked for dissent during the second half.

Clattenburg made no comment but the Professional Game Match Officials Board (PGMO), which manages top English referees, said in a statement reported by media that the allegations are "being treated with the utmost seriousness".

Clattenburg will co-operate fully and "welcomes the opportunity for the facts to be established," it added.

The issue completed a incident-packed afternoon in West London which also saw a steward taken to hospital with a leg injury after fans' anger boiled over following Clattenburg's decision to send off Torres for diving under a challenge from United defender Jonny Evans.

The whole weekend of Premier League action was marred by poor decisions by officials with Liverpool's Luis Suarez having a winner wrongly ruled out for offside in a 2-2 derby draw with Everton.

Mikel Arteta's goal in Arsenal's 1-0 win over Queens Park Rangers was given despite being offside.

FIFA referee Clattenburg, no stranger to controversy, was criticised by Chelsea manager Roberto Di Matteo for "ruining" the match.

While Ivanovic could have few complaints after accidentally impeding Ashley Young who was through on goal, the decision to show Torres a second yellow and dismiss the Spaniard sparked outrage on and off the pitch as he appeared to be clipped.

"We must be disappointed that key decisions were wrong," Chelsea manager Di Matteo told reporters.

"At 2-2 we looked like the team that was going to win the game. It was a good game between good teams and the official ruined it. Key decisions have to be right and you don't want the referees to have such a big influence.

"I think it's obvious in the eyes of everybody that the second yellow for Fernando was wrong. It was a foul for us and probably he should have booked their player.

"Their winning goal was an offside goal. It's a shame a game like that had to be decided by officials in that manner. Surely when he see it he will realise that he made big mistakes."

Before the match both sets of play