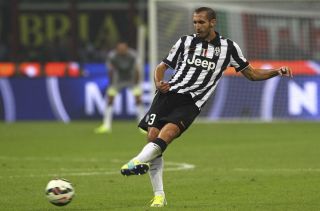 The Italian champions succumbed to a late Arda Turan strike as the visitors conceded the first goal of Massimiliano Allegri's reign at the Vicente Calderon.

Diego Simeone's La Liga titleholders are now up and running in the competition after a game in which Juve failed to muster an attempt on target.

Neither side threatened too much in a largely scrappy affair, although the Italy international believes a draw would have been a fair result.

"We played our game, we knew it would be like this and we did it well," he told Sport Mediaset.

"It's a shame as the game should've ended at least 0-0 and we wanted to make the most of any gap we found.

"We leave here with regrets, as we deserved at least a point here."

Juve remain in a strong position to qualify from Group A and now turn their attention to Sunday's Serie A clash with last year's runner-up Roma.

"We knew the group would be very balanced, now in three weeks we have an important trip to [play Olympiacos in] Athens that will say a lot about what we can do in this group," he added.

"Let's leave tonight to recover from this disappointment, then from tomorrow we will think about Roma."