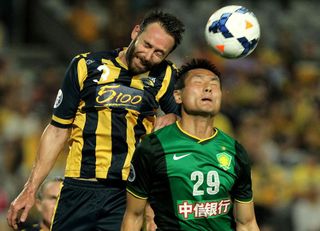 Marcello Lippi's defending champions simply needed to avoid defeat at the Tianhe Stadium to ensure a fourth consecutive top-flight title - having previously lost only three times in the league this term.

However, second-place Beijing kept alive their slim hopes of winning the league thanks to Shao Jiayi's late winner.

Lippi's men remained on course to clinch the CSL even after Sun Xiang's dismissal early in the second half but were undone by Jiayi's effort two minutes from time.

It was Beijing's first win over Guangzhou since November 2012 and Gregorio Manzano's side can usurp the holders in next week's final round of fixtures - provided they beat Henan Jianye and Shandong Luneng overcome Guangzhou.

Henan will have plenty to play for next week as they remain firmly in the relegation mix-up despite a 3-0 win at home to Hangzhou.

The visitors had leading goalscorer Anselmo Ramon sent off shortly after the hour mark but, by that point, Henan were already two to the good thanks to goals from Ryan Johnson and Gibril Sankoh.

Nando Rafael made it three shortly after Ramon's dismissal - both Henan and Hangzhou now left with relegation fears.

Already relegated Harbin Yiteng took the lead against Guangzhou R and F before the home side responded with five unanswered goals.

Dalian Aerbin look most likely to join Harbin in the second tier.

Trailing Henan by a point going into next week's clash with Shanghai Shenxin, Dalian were undone by James Chamanga's brace in their 2-1 defeat to Liaoning Whowin.

Chen Tao had levelled but Chamanga grabbed the winner 17 minutes from time to secure Liaoning's safety, with Dalian likely to require a win to stave off the drop.

Changchun Yatai's inferior head-to-head record against Dalian leaves Dragomir Okuka's men with a slight worry over their top-flight status after they were beaten 2-0 by the weekend's big winners Shanghai Shenxin.

Shenxin moved out of the bottom two and ensured their safety thanks to goals from Everton and Jiang Jiajun, while neighbours Shanghai SIPG moved fourth as late goals from Wu Lei and Tobias Hysen helped ensure a 3-0 win over Jiangsu Sainty.

The game between Guizhou Renhe and Shandong Luneng ended goalless - a third draw in a row for the latter - while Andrezinho's hat-trick helped Tianjin Teda to a 5-2 win over Shanghai Shenhua.