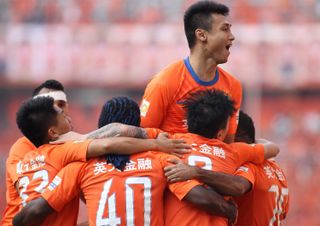 The win moved Svetozar Sapuric's men out of the relegation zone and into 14th, after goals from Enio Oliveira and Jan Rezek in the opening eight minutes handed the hosts an ideal start.

While Wang Xinxin pulled one back three minutes before the hour mark Tianbao Cao grabbed a third for Yatai to put them a point clear of Qingdao Jonoon, who sit in 15th after defeat to champions Guangzhou Evergrande.

Evergrande, who clinched the title earlier this month and face Seoul in the first leg of the AFC Champions League final on Saturday, showed no signs of slowing down as both campaigns draw to a close.

Bowen Huang and Muriqui put the home side ahead in the first half and Dario Conca wrapped up the 3-1 win after Reboli Bruno Meneghel pulled one back just after the hour mark.

Fellow relegation rivals Hangzhou and Jiangsu Sainty picked up points, which could be crucial at both ends of the table, drawing 1-1 with Beijing Guoan and Shandong Luneng respectively.

The draws keep Jiangsu and Hangzhou level on points although Beijing's dropped points allowed Guizhou Renhe to close the gap to the final AFC Champions League spot to a point.

A brace from Zhang Chenglin and further goals from Wan Houliang and Fan Yunlong helped Guizhou recover from consecutive league defeats to beat Liaoning Whowin 4-2 and boost their chances of securing third place.

Relegated Wuhan Zall slipped to their 18th defeat of the season, losing 1-0 to Shanghai SIPG while Shanghai Shenxin clinched three points against Guangzhou thanks to a Jailton Paraiba goal.

Dalian Aerbin moved level on points with Saturday's opponents Shanghai Shenhua after beating them 1-0 thanks to Hejing Zhao's goal six minutes after the interval.