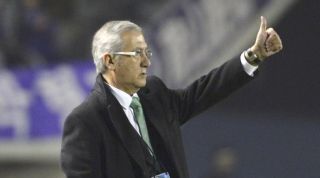 Guangzhou had the weekend off as they concentrated on their AFC Champions League quarter-final encounters with Western Sydney Wanderers, opening the door for Guoan to reduce the deficit to four points with their game in hand.

However, Guoan were always playing catch-up at Shandong Luneng, with Vagner Love opening the scoring for the home side in the fourth minute.

Erton Fejzullahu netted his fifth goal in as many starts to restore parity after the interval, but Guoan were unable to find a winner and now sit six points short of Evergrande.

Guoan, who have taken four points from their last three fixtures, may now be looking over their shoulders to Guangzhou R and F and Shanghai SIPG, who have picked up nine in the same period.

Their latest triumph came at home to struggling Dalian Aerbin - Tobias Hysen and Wu Lei finding the back of the net in the first half as they closed the gap on second to five points.

R and F just edge SIPG into third by virtue of their better goal difference, and were 3-1 winners over Changchun Yatai on Sunday.

Harbin Yiteng's hopes of top-flight survival received a huge boost as they picked up an impressive 3-1 victory over Hangzhou on Monday.

Han Deming scored either side of Dori strike to send Yiteng in with a 3-0 lead at the break, with Davy Angan's second-half reply serving only as consolation.