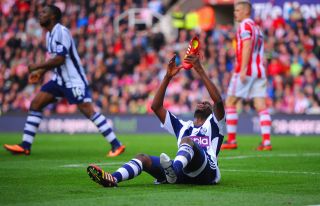 The Scot was unhappy following an incident that came early in the second half, with Youssouf Mulumbu appealing after Charlie Adam appeared to tread on his heel in the 0-0 draw.

Referee Howard Webb waved play on after looking over to his assistant, but Clarke was left ruing the decision.

"I think the word for it is stonewall penalty, how the officials have missed it is beyond belief really but sometimes you get decisions and sometimes you don't and today it is a decision that didn't come our way," he said.

"I think if he (Mulumbu) wanted to try and con the referee he would have gone down on the first contact but he managed to wriggle free of that and it's clear, whatever angle you look at it, it's a penalty.

"Charlie (Adam), I don't think he meant to do it, but he ran down the back of his foot and took his boot off, it was a clear, clear penalty."

Clarke was, however, happy with his team's overall performance and a point that sees them break their club record unbeaten Premier League streak, which now stands at five games.

"We had some terrific chances, off the top of my head I can remember three clear-cut - I think two for Stephane (Sessegnon) and one for Morgan (Amalfitano) in the first half that were clear chances," he added.

"You have to give credit to their goalkeeper who gets man of the match, which tells you a little bit about the balance of play and where the best chances fell.

"On another day, we should be talking about a good victory but instead of that it's a hard-earned point."