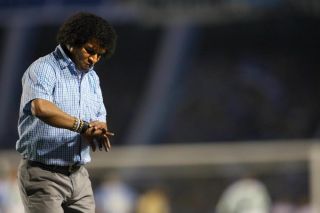 Alianza Petrolera's 1-0 win at home to Once Caldas opened the door for Deportes Tolima, whose draw against Atletico Nacional was enough to send them top.

Alberto Gamero's Deportes Tolima moved a point clear after the 1-1 draw at home.

Despite the hosts being on the back foot through the first half, Davinson Monsalve put them ahead with a scrappy goal following a corner in the 40th minute.

At Alianza Petrolera, David Valencia headed in the game's only goal in the 18th minute against Once Caldas.

The hosts managed to hold on despite a 33rd-minute red card to Jonathan Avila.

Second-placed Aguilas Doradas claimed their third win in four games as Edison Palomino scored a second-half brace in a 2-0 victory at Fortaleza.

At the other end of the table, La Equidad remain without  a point after a fourth straight loss, beaten 3-2 at Uniautonoma.

The win was Uniautonoma's first of the season and came thanks to a brace from Michael Barrios.

Winless Deportivo Pasto sit on three points after another draw, this time a 1-1 result at Millonarios.

Boyaca Chico came from behind to draw 2-2 at Envigado and Atletico Huila finished their 4-1 loss at Medellin with nine men.