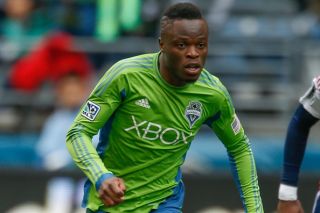 The MLS outfit, founded in 2009, made a stunning start to their life in the North American tournament, with two goals in either half in Guyana.

Steve Zakuani fired Portland ahead in the 18th minute after being played through on the left side of the pitch by midfielder Kalif Alhassan.

A defensive calamity for the hosts left Maximiliano Urruti with a simple finish, and the Argentine duly doubled their advantage in the 34th minute past a hapless Ronson Williams in the Alpha goal.

A stunning effort from a set piece from Barbosa Murillo gave Alpha hope on the stroke of half-time, the Brazilian's strike going in off the underside of the crossbar despite Portland goalkeeper Andrew Weber's best efforts.

The tricks did not stop there, though, as Fanendo Adi flicked Alvas Powell's cross into the net to reinstate Portland's two-goal buffer in the 66th minute.

Adi, despite being marked, flicked the ball past Williams without looking.

Powell was on hand to make it 4-1, after Rodney Wallace's cross into a dangerous area was not completely cleared by the Alpha defence - and the unmarked Jamaican tapped in the visitors' fourth.

Caleb Porter's side sit top of Group Five on goal difference from Olimpia, who also have three points after downing Alpha.

Liga MX outfit America blitzed Bayamon FC with five first-half goals on their way to a 6-1 win over the Puerto Rican side.

Moises Velasco, Michael Arroyo, Ventura Alvarado and Martin Zuniga all had goals by the 20-minute mark at the Estadio Azteca.

Gil Buron added a fifth in first-half injury time, before Bayamon got on the scoresheet on the hour-mark through Nicholas Walker.

But it would prove mere consolation for the visitors, and Zuniga ensured America claimed top spot in Group Eight when he scored in the third minute of additional time.

America and Comunicaciones both have three points and plus-five goal difference after respective thrashings of Bayamon, but the Mexicans' goals for has them slightly on top of the table.

A Jorge Claros own goal in the sixth minute gave Real the lead, only for Toni to restore parity 10 minutes later.

Panamanian side Chorrillo are clear top in Group Six, after a 1-0 win at home to Liga MX outfit Cruz Azul.

Justin Arboleda's 70th-minute penalty was enough for the hosts to take all three points, and be two points clear top.