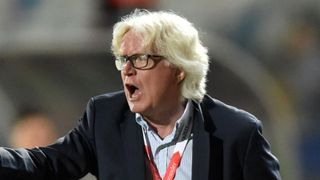 CONCACAF Gold Cup runners-up Jamaica are in danger of a shock elimination in the third round of World Cup qualifying after a 3-2 loss at home to Nicaragua on Friday.

Winfried Schafer's men conceded twice in the opening eight minutes in the surprise defeat at Independence Park in Kingston.

A Manuel Rosas penalty and Carlos Chavarria goal sent Nicaragua, ranked 87 places lower than their hosts, on their way.

Fortunately for Jamaica, Darren Mattocks and Adrian Mariappa struck to give them hope ahead of Tuesday's second leg in Managua.

Canada avoided any such troubles, completely dominating Belize in a 3-0 win in Toronto.

Tosaint Ricketts was credited with a brace - the opener, however, appeared to be an own goal - before Atiba Hutchinson's late tap-in sealed a strong first-leg showing from Benito Floro's hosts at BMO Field.

Elsewhere, St Vincent and the Grenadines beat Aruba 2-0 at home, Haiti were 3-1 winners at Grenada and El Salvador edged to a 1-0 victory at Curacao.