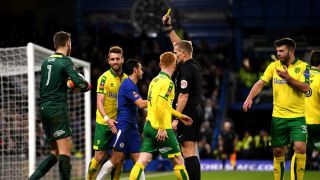 Antonio Conte has conceded Pedro's booking for simulation against Norwich City on Wednesday was deserved but repeated his claim that VAR needs to be implemented correctly in England.

Former Barcelona winger Pedro was shown a yellow card for going to ground despite there being no contact with Canaries goalkeeper Angus Gunn in the FA Cup third round replay at Stamford Bridge which the hosts eventually won on a penalty shoot-out.

The Spaniard was later sent-off, as was striker Alvaro Morata, whose first caution was also for alleged simulation. A third player, Willian, was another booked for diving.

Conte insisted both Morata and Willian were harshly treated but showed no such support for Pedro.

Speaking ahead of Saturday's trip to Brighton and Hove Albion, Conte told reporters: "I must be honest, I watched the three situations against Norwich and I think Willian's situation was very clear - it was a big mistake.

"For Pedro, we must be honest and accept Pedro dived."

Conte: 'We have a fantastic motivation, which is to finish the league in the top four. It won't be easy, I must be clear. It will be a big fight with five other teams for only four places.'January 19, 2018

Conte said he would not be discussing the incident with Pedro, however, adding: "The player is clever, he's intelligent to understand when you make a mistake. In this case, Pedro understood this mistake."

Italian Conte criticised VAR following the midweek clash and reiterated the system that is currently being trialled needs to be utilised better before it is rolled out in the Premier League.