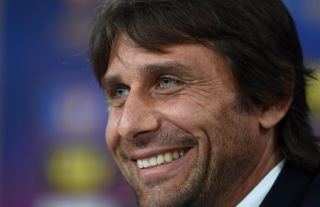 Goals from Ezequiel Garay and Lima, either side of a Carlos Tevez effort, handed the Portuguese side the advantage in the first leg of their semi-final at Estadio da Luz.

However, Conte was pleased with Juve's second-half showing and is confident of booking a place in the final - to be held at the Juventus Stadium in May.

Conte was especially buoyed by the positive mindset Juve took into the game against last year's runners-up.

"We're optimistic and confident regardless of how we performed tonight. It wasn't easy to come here and take the game to them," he said.

"They played on the break the whole time, while we played a continental style of football, with intensity and a high tempo to our play.

"It was a good game and we did Italian football proud.

"The tie is still open. We'll do everything we possibly can at Juventus Stadium, boosted by our fans."

Juve hold an eight-point lead over Roma at the top of Serie A ahead of their clash with relegation-threatened Sassuolo on Monday as they strive to complete a famous double.