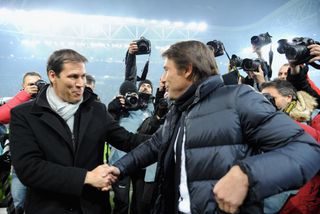 Conte was involved in public verbal stoushes in the media with the Napoli and Roma bosses respectively in the latter part of the Serie A campaign - one Juve went on to win for a third straight Scudetto.

Benitez got under Conte's skin by offering advice on how to beat Benfica - a side Benitez mastered with Chelsea in the 2012-13 UEFA Europa League final - ahead of Juve's Europa semi-final with the Portuguese outfit this term.

Benfica would win the two-leg semi 2-1 on aggregate.

Also, Garcia niggled Conte by claiming the smaller Italian clubs do not try against Juventus, to which the latter took offence.

However, the 44-year-old said he maintains a professional courtesy to his technical-area counterparts.

"For me, I go into battle without looking at anyone else," Conte told Rai Sport.

"Personally, it's important that you neither like nor dislike someone you're going up against.

"But I have to distinguish between the private Antonio and the professional one."

Conte said after a hat-trick of domestic titles, continental glory is on the minds of his squad.

"Of course, we hope to win the Champions League," Conte said.

"We're working hard to achieve our goals. We’re dreaming, but the important thing is to stay firmly in reality.

"We all have to understand that winning is not easy – especially at the highest level."