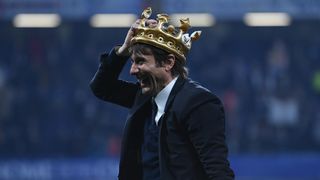 Chelsea head coach Antonio Conte was not impressed with Diego Costa's failure to deliver him some chocolate cake during Monday's 4-3 win over Watford.

Costa was rested with an eye on the FA Cup final against Arsenal later this month and made the most of his role on the bench by sneaking into the press room at half-time for some food.

The Spain international got himself an orange before returning to the bench, but Conte was more interested in something sweet and joked he was not happy to see Costa return without a treat.

"Which type of food did he have?" Conte quizzed the journalists when informed about Costa's visit to the press room.

"It is important, this... chocolate cake? In this case I am very angry with him. He must think to give me a bit of chocolate cake to share. I was suffering during the game. To eat a bit of cake or chocolate, that would be good.

"Next time I will tell him to think of me as well and share."

While Costa got some deserved rest, fellow Spain international Cesar Azpilicueta featured for the full 90 minutes as right wing-back after mainly playing in a more central role this term, impressing Conte with his versatility.

"It’s been a massive season for him. Azpi played in a fantastic way," Conte added.

"When you have this type of player it is great for the coach. If I ask him to go and put on the gloves and stay in goal he is ready. He is a model footballer and able to play in different roles.

"He played as a wing-back, he scored one goal and could have had two or three. He is having an amazing season."