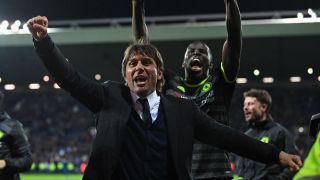 It would be hard to sell Chelsea's Premier League title triumph as anything approaching a feel-good story or a tale of against-the-odds success, particularly in light of who they deposed to be crowned champions.

But while the Blues may have restored a more familiar order of things in England's top flight, the way in which Antonio Conte has masterminded that feat offers much to admire – and a few lessons for his fellow 'super-coaches' Pep Guardiola, Jose Mourinho and Jurgen Klopp to take heed of.

It can't be denied that Mourinho's title-winning Chelsea vintage – back-to-back between 2004 and 2006, then once more in 2014-15 – failed to inspire much love from the neutrals, many of whom balked at the Portuguese's overt arrogance.

Conte stands in stark contrast. It's not that he lacks that same self-assurance as his predecessor, but he carries it with a grace that endears him to the masses, even those who find it hard to warm to a club reshaped by Roman Abramovich's billions.

When his side thrashed Middlesbrough to condemn them to relegation at Stamford Bridge – a result that put the hosts on the brink of winning the league – Conte consoled his beaten opponents, shaking hands and applauding the travelling fans. It was a touch of class from the Italian which by then came as no surprise.

Antonio Conte: 'I felt in my heart to go and clap the fans and also wish every single Middlesbrough player good luck for next season.’ May 9, 2017

Having led a dominant Juventus to three Scudetti before taking the Italy job, Conte initially met with a much sterner test in London.

Of course, he had inherited a side fresh from one of the meekest Premier League title defences in history, with Chelsea having finished 10th.

By the end of September, they were eighth and eight points behind Guardiola's City, while Klopp had already enjoyed a 2-1 victory at Stamford Bridge.

A 3-0 loss at Arsene Wenger's Arsenal set alarm bells ringing and at one stage several bookmakers suspended betting on the 47-year-old Italian being the next manager to get sacked.

Something had to change, but it wasn't the boss.

Conte switched to a 3-4-3 formation and Chelsea became an entirely different prospect. By the end of the year, a 13-match top-flight winning run had seen that eight-point deficit transformed into a six-point lead. Indeed, Guardiola's City were suddenly 10 points back.

That streak of victories included games against Manchester United, City and – in a result what would prove telling in the final reckoning – Tottenham.

It was Spurs who emerged as the most threatening and persistent challenge to Chelsea's title tilt, but Conte's tactical reshuffle had reinvigorated his side.

Diego Costa, amid ongoing transfer speculation, was back to his prolific best and breaking the 20-goal barrier once again; Eden Hazard, so inexplicably underwhelming the season before, was able to shine as he had in his ever-present 2014-15 league campaign; Cesc Fabregas, though far from a regular starter, racked up double-figure assists for the sixth time.

Then there was the invaluable presence, even omnipresence, of N'Golo Kante. The signing of the season? Few could challenge the Frenchman for that mantle.

Conte has also handled the winding down of club legend John Terry's Chelsea career with tact, always speaking highly of him in public, without allowing any sense of sentimentality emanating from the fans to cloud his selection decisions.

And so when the moment that had for so long seemed inevitable finally arrived and Chelsea resumed their seat upon the Premier League champions' throne, secured with a hard-fought 1-0 win at West Brom, even the most cynical of observers were moved to nod their head in appreciation of a job well done by Conte.

What awaits next is arguably a tougher examination, with a Champions League campaign to contend with next term and the added pressure, albeit welcome, of being the top dogs.

Conte will have Guardiola, Klopp, Mourinho and, of course, Mauricio Pochettino snapping at his heels, should all stay in situ, but he has a head start on the lot.