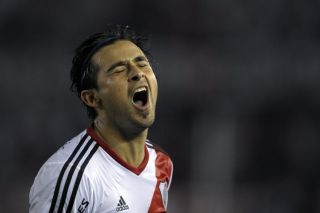 With neither Primera Division's River Plate nor second-tier side Colon able to break the goalless stalemate after 90 minutes at the Estadio Provincial Juan Gilberto Funes, the last 16 knockout fixture was decided from the spot.

Substitute Leonardo Pisculichi, Osmar Ferreyra, Ramiro Funes Mori and Bruno Urribarri all scored for the hosts as second division team Colon were eliminated, while Teofilo Gutierrez was the only River player unsuccessful with his attempt.

Marcelo Gallardo's River will now face the winner of Rosario Central's clash with Tigre - both of whom play in the Primera Division - in the quarters.

Joining River in the final eight are third-tier outfit Estudiantes de Caseros, who prevailed 1-0 over Instituto at the Estadio Julio Humberto Grondona on Tuesday.

Next up for Estudiantes des Caseros is either Racing or Argentinos Juniors.