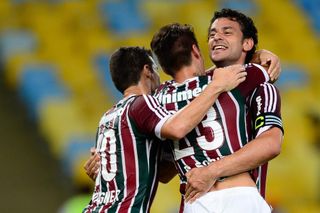 The Brazilian Serie A powerhouse were inspired by a Fred brace, plus a late strike from Walter, to ensure they would not have to host Tupi - and progress into the third round of the cup competition.

Copa rules state a two-goal away win in the first leg - at least - ensures automatic progression.

Other second-round ties to get underway during the week will require second legs, though.

Serie B team Parana fought back for a 1-1 draw at home to fellow second-tier club Ponte Preta.

Adrianinho had put Ponte Preta within a goal of automatic progression in the 52nd minute, but Anderson Rosa's equaliser ensured Parana's survival in the cup.

Third-tier CRB stunned Sao Paulo 2-1, with the Serie A outfit playing the final half-hour with 10 men.

Sao Paulo hit the front on 25 minutes via Ademilson, to put the tie on a knife's edge.

But CRB hit back admirably, with a Tozim penalty on 34 minutes followed by Diego Rosa's winner seven minutes from time.

Santa Rita, who play in a state competition in Alagoas, beat Serie D side Potiguar Mossoro 2-0 at home, to put themselves in a strong position to advance.