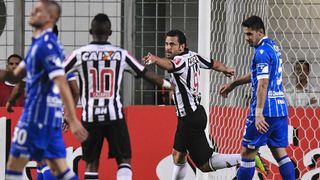 Atletico Mineiro secured top spot in their Copa Libertadores group, while Emelec moved a step closer to the knockout round.

Top spot in Group 6 was up for grabs on matchday six in the Brazilian city, with Mineiro and Godoy Cruz already assured of a place in the last 16.

And Mineiro pipped their Argentinean visitors to the summit thanks to Cazares' first-half double, while former Brazil internationals Elias and Fred were on target at Estadio Raimundo Sampaio.

Meanwhile, Libertad drew 1-1 with Sport Boys in a clash between the two relegated sides.

Emelec overcame Medellin 2-1 in the race for second position in Group 3.

With River Plate already booking their place in the round of 16, Emelec and Medellin are vying for the remaining berth.

It is still all to play for in Group 7 after leaders Nacional were held to a goalless draw by Zulia.