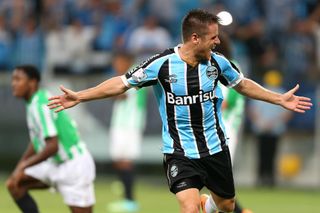 Attacking midfielder Ramiro led the way for Gremio, setting up the Brazilian club's opening goal and then scoring the second before Alan Ruiz wrapped up the victory with a fine solo strike in the 89th minute.

Having accounted for Uruguay's Nacional in the opening matchday of the group stages, Gremio's defeat of Atletico Nacional took them to six points, three clear of their Colombian opponents.

Nacional and Newell's Old Boys will play their second group stage match on Thursday with both sides yet to break their points duck.

Gremio hit the front just before the half-hour mark when Ramiro lifted the ball over Atletico Nacional's defence and Luan pushed off team-mate Cristian Riveros before lobbing the visiting goalkeeper.

In the 65th minute, Ramiro side-footed home from directly in front of goal after a cutback from left-back Wendell, while substitute Ruiz made it 3-0 with a minute left in regulation time, cutting in from the right on a slaloming run, before tucking the ball inside the near post.

In Group Eight, Arsenal missed a second-half penalty but were still too strong for 10-man Deportivo Anzoategui, winning 3-0.

Anzoategui had Enmanuel Calzadilla sent off just before half-time after the Venezuelan visitors had already fallen two goals behind.

Julio Furch gave Arsenal the lead in the 16th minute with a towering header from a free-kick, while the 24-year-old striker sent another set piece back across goal with two minutes until half-time for Ramiro Carrera to double the home side's advantage.

Just six minutes into the second half and the Argentine club led 3-0 after yet another header, with Milton Caraglio flicking Hugo Nervo's long ball over Anzoategui goalkeeper Edixon Gonzalez from the edge of the box.

The win took Arsenal to three points after they lost their opening game to Santos Laguna of Mexico.

Santos top Group Eight with six points after a second win last week, while Arsenal have a two-point gap on Penarol and Anzoategui.

In the other matches on Tuesday, Velez Sarsfield claimed their second victory in a row with a 2-0 triumph over Atletico Paranaense to lead Group One, while Ricardo Goulart scored a hat-trick in Cruzeiro's 5-1 thrashing of Universidad de Chile in Group Five.