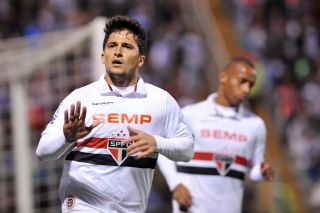 The defending Copa Sudamericana champions were held at home to a 1-1 draw by Catolica in the first leg but fought back to win the second leg in Chile 4-3.

There was an early setback for the Brazilians with Ismael Sosa firing Catolica into a 16th-minute lead before Aloisio restored parity three minutes later.

It was the same circumstance in the 23rd minute as Fernando Cordero put Catolica back in front but the lead only lasted a minute as Aloisio secured his brace that evened the tie and gave Sao Paulo the away goals advantage.

The score remained 2-2 through half-time and early stages of the second period until Sao Paulo grabbed a stranglehold on the tie with Ademilson's 66th-minute goal.

Catolica did try to fight back into the contest and scored a third from the penalty spot through Milovan Mirosevic on 71 minutes but an 85th-minute goal from Welliton wrapped up proceedings for Sao Paulo.

Brazil's Bahia were eliminated 4-3 on penalties by Colombia's Atletico Nacional despite a 1-0 win at home in the second leg.

With the Colombians winning 1-0 in the first leg, penalties ensued after 90 minutes of the second leg with Souza and Fabricio Lusa missing for Bahia in the shootout.

Paraguay's Libertad had no trouble knocking out Brazilian Serie B club Sport Recife 4-1 on aggregate after a 2-1 win away from home.

After enjoying a comfortable 2-0 win in the first-leg, Libertad scored in the 42nd minute through Jorge Gonzalez and despite Ailson equalising on 47 minutes, the same Sport player put through his own net four minutes later to send the Paraguayans through.

In the other round-of -16 matches, Brazil's Ponte Preta advanced with a 2-1 aggregate win over Colombia's Deportivo Pasto despite a 1-0 loss on the road while Colombian side Itagui sealed progression 3-1 on aggregate over Brazil's Coritiba with a 2-1 win at home.