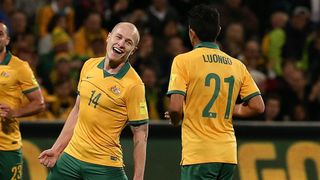 Former Australia international Jason Culina has challenged the heirs to the national team's midfield throne to push themselves to greater heights.

Culina - once a mainstay in the Socceroos midfield alongside Marco Bresciano - said there is no doubting the talent of Aussie midfield trio Massimo Luongo, Aaron Mooy and Tom Rogic, but wants them to kick on and reach new heights.

All three have been selected in Ange Postecoglou's latest Australia squad for World Cup qualifiers against Tajikistan (March 24) and Jordan (March 29).

The former PSV midfielder enjoyed a nine-year career in Europe playing in the Eredivisie, during which he also played Champions League football, while representing Australia 58 times and he believes the likes of Mooy, Luongo and Rogic should aspire to similar achievements.

"There's no doubt these guys are talented," Culina told Omnisport.

"With talent, there is a certain amount of responsibility and pressure.

"These players have at times experienced pressure and it is how you perform and come out of these situations which will determine ultimately whether you're regarded as a top player or not.

"I would like to see them challenged on a regular basis and that means they need to be playing against top opposition more often to gain good quality experience and harden them up for these top games."

Culina said Mooy has left little doubt in the public mind about his ability following a stellar season with A-League outfit Melbourne City.

"Aaron Mooy has shown he has the quality, but he's done it in a lesser league in the A-League. I'd like to see him play at a high level and then we can see if he's up to it or not," he said.

It is a similar story with European-based talents Rogic at Celtic and Luongo at QPR.

"Rogic has been up and down last couple of years and he was finding his feet at Celtic, but it's good to see him trying," Culina added.

"Luongo, he's a player that a lot of the Australian public and coaching staff have held him in high regard, but I think he need to show a little bit more as well because there are games where he goes missing.

"He needs to show, if he wants to be a regular in the national team, he needs to be a little bit more decisive and play better on a more regular basis.

"You only get that from playing at a higher level.

"There's no doubt they're capable. But they need to play at a higher level and that's the only way they will keep improving."