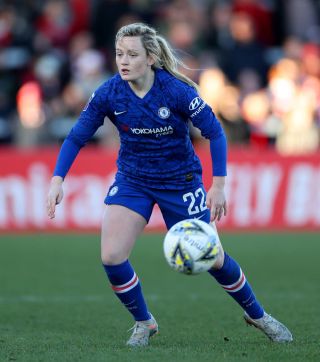 Erin Cuthbert spread the praise around her Chelsea colleagues after thriving up front in an 8-0 Women’s Super League demolition of West Ham.

Chelsea looked comfortable throughout the game, finishing the first half 3-0 ahead with goals from Maren Mjelde, Bethany England and Sophie Ingle.

West Ham failed to muster a response in the second half and midfielder Cuthbert, playing in the striking role vacated by Sam Kerr, who is away with the Australia national team, resumed the scoring with a goal in the 52nd minute.

Chelsea attacked relentlessly through to the final whistle, with England and Mjelde each getting their second and substitutes Ramona Bachmann and Emily Murphy also getting one each in the final minutes of the game.

Bachmann, who has struggled to get on the scoresheet this season, was visibly frustrated and had to be encouraged by team-mate Cuthbert when she missed a couple chances after coming on in the second half. When her goal finally came in the 87th minute she took her opportunity to celebrate.

Cuthbert said: “I am really happy for her and you could see she was so relieved, you saw the way that she celebrated and we celebrated with her because we know how much it means to her… she missed a couple when she came on so she was really disappointed, so it is about lifting her up because she is scoring goals in training and just not scoring in the games.”

Murphy’s goal to make it 8-0 was her first for the senior team.

Cuthbert was not surprised that academy players are starting to show their pedigree, insisting Chelsea’s youngsters “are in the best hands, we are looking after them”.

She added: “I think it’s great that we are getting the academy players involved. They have been training with us since I came into the team so I am not surprised to see them come in and do so well.”

On her own goal, Cuthbert said: “I always seem to score the harder ones, I had a couple at the start of the game that I couldn’t seem to get out of my feet but as a striker you expect to score goals, I am filling in Sam Kerr’s place it is not an easy thing to do.”

Manager Emma Hayes praised Chelsea’s team performance, saying: “The fact that everyone is willing to do something or everything for each other is one of the hardest things to achieve within the team so the fact the team are challenging each other to find higher levels every week shows they buy into the concept of the team and that it is a selfless task they take part in.”

Competition for places is clearly fierce in the Chelsea squad and Hayes said: “It doesn’t matter who they are, players are coming in and doing the jobs that are asked of them and I think no one player is safe in this team, you have to produce a performance to stay in the team.”

Hayes has some difficult decisions to make in future games, with so many players producing strong performances and Kerr returning from international duty.

When asked if Kerr and Bachmann could play together, Hayes responded: “Anything is possible, with the strength of this team it could be me and Kerr starting as strikers.”

Chelsea have six games in February, but neither Cuthbert nor Hayes see February as a make-or-break month.

Cuthbert said: “Every month is important… after Christmas is the business end of the season, but there is no point winning every game in February and then you lose one in March.”