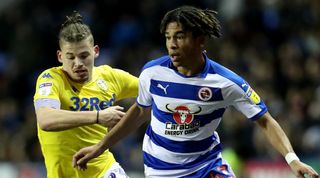 According to Wales Online, Loader is also being tracked by Cardiff, Wolves, Juventus, Borussia Monchengladbach and Lyon.

The 18-year-old scored 10 goals in 11 appearences for Reading's under-23 side last season.

Reading may be forced into selling the player for just £3million because he's only just turned senior.

With so much interest from European top-flight clubs, Arsenal and Chelsea will face stiff competition for the Young Lion's signature.