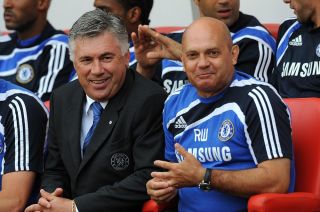 Why was he so well respected?

After Wilkins died, an anonymous soldier credited him for saving his life when the former midfielder took time to sit with him on the street, give him £20 and buy him a coffee.

He told talkSPORT: “That night I took that £20 and I got some shelter and I had a hot meal. During that time, when I was in the shelter, I met a guy who was helping ex-soldiers and put me in touch with decent people who would help me.”

Wilkins’ sudden death shocked football with England manager Gareth Southgate, who played with him at Crystal Palace, leading the tributes.
“I’ll always remember the humility that he had. He just fitted into the group so easily and had the complete respect of everybody,” he said at the time.

Sir Alex Ferguson also paid his respects: “Ray was a great football man, who was well respected and liked by all who knew him and he always had a kind word and time for people.”

Despite only spending around four months at Aston Villa as a coach in his last role he also made a lasting impact on Jack Grealish.

Grealish tweeted at the time: “So upset to hear the news of Ray Wilkins. RIP Ray.A true gentleman and one of the nicest guys I’ve ever met.”

Who did he play for?

He started his career at Chelsea in 1973 before moving to Manchester United and having a three-year spell at AC Milan.

He won two SPL titles at Rangers after a short spell at Paris St Germain and then spent an initial six years at QPR.

A brief time at Crystal Palace ended when he returned as QPR’s player/manager in 1994 and after leaving Loftus Road two years later he played for Wycombe, Millwall, Hibernian and Leyton Orient.

Who did he manage?

After his stint at QPR and following retirement, Wilkins took charge of Fulham between 1997 and 1998 and in 1999 he returned to Chelsea as first-team coach.

Spells at Watford, Millwall and England Under-21s followed before another coaching role at Stamford Bridge beckoned, before he left again in 2010.

Wilkins managed the Jordan national team briefly, between working at Fulham and Aston Villa, his last club before leaving in 2015.