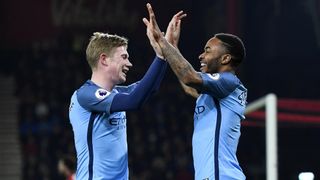 Following a week of criticism aimed at Raheem Sterling, his Manchester City teammate Kevin De Bruyne has hit back at those singling him out from "behind a keyboard".

Sterling has been at the centre of controversy after a picture of his gun tattoo surfaced on social media, which sparked outrage from a British tabloid.

He was in the headlines once again a few days later; this time because it was revealed he arrived late to the England training camp due to a delayed flight coming back from a holiday in Jamaica.

But De Bruyne believes the media focus should be shifted to Sterling's talent on the pitch instead.

"He is an unbelievable player," the Belgium international told reporters. "I don't know why people in England always want to criticise him. He is a good guy.

"Why do people talk about things they don't know about? It's easy to talk behind a keyboard.

"I wouldn't care if people were saying things like that about me. I've never seen Raheem do stupid things.

"If he had done drugs or something dumb I would think; 'OK, yeah, that's a problem'. But these days you get scrutiny for everything."

Looking to his own team's World Cup campaign, the Belgian midfielder is confident that the team can progress following a smooth qualification period.

"Qualification was really easy, we had an easy group," he said. "Playing teams like Gibraltar who don't have any professional players, we were able to have a huge goal difference."

Their final group game pits them against England, a team many of the Belgian players are familiar with from their club football.

"All of our players know the English players and what they are like," he added. "They have a young and talented team.

"They are at the same level as us. I don't know what Panama and Tunisia are like, we have friendly games first and then we will look at those two teams.

"It doesn't matter sometimes if you finish first or second in the group. We finished second last time [in Euro 2016] which was probably easier because we played Hungary, but if we finished first we would have played Spain."

Belgium's next game will see them face Egypt in a friendly on Wednesday.