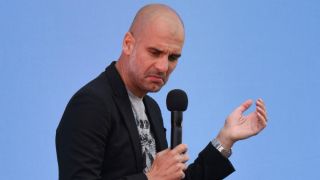 Pep Guardiola says he has come to Manchester City to prove that his style of football can deliver Premier League dominance.

The former midfielder, who agreed a deal to replace Manuel Pellegrini at the Etihad Stadium during last season, delivered three consecutive Bundesliga titles during his time with Bayern Munich.

Guardiola's success in Germany followed a glittering four-year spell as Barcelona head coach, in which he claimed four league titles, two Copas del Rey and two Champions Leagues, with his team lauded as one of the greatest club sides in football history for marrying style with success.

The 45-year-old's commitment to possession-based, attacking football has seen some critics suggest he will struggle to adapt to the physical rigours of England's top flight, but he was forthright in his confidence when addressing the media for the first time as City boss on Friday.

"That's why I'm here – to prove myself, to prove that I can do that," he said. "It's the reason I'm here. I had everything at Barcelona, the best player ever and most of the team from the academy, and Bayern, a club with a lot of experience.

"This is another test. It would have been comfortable to stay where I was. We want to play as we want, not just as I want.

"In the end, what we want is so simple. If the opponent has the ball, take it back as soon as possible. When you have it, create as much as possible. That's my target for my next life here in Manchester.

"Winning these games is not easy. Managers with more experience in England than me have talked about that. Maybe that's the challenge – be more constant in our game. We want to win as many titles as possible but it's better to live with that pressure, rather than 'it's okay, winning is okay'.

"Maybe we won't be able to win every day, but we're going to try."

City have been heavily linked with a bid for Juventus defender Leonardo Bonucci, as Guardiola sets about further adding to his squad following the arrivals Ilkay Gundogan, Nolito and Oleksandr Zinchenko.

Guardiola would not be drawn on any potential transfer business but suggested that further moves in the market are in the offing, once he has further assessed his squad.

"All clubs try to get the best squad possible," he said. "Maybe this is not the right place to explain about new players, out of respect for players and other clubs. But I know how good the journalists in England are. I want to try to move the squad a little bit.

"My responsibility is to do everything for the players. The other business for the club is great, huge. I'm just focused on my players, on what we have to do on the pitch.

"I just arrived 10 days ago, I need time, but we're going to try to do our best for our people, especially for our players to be happy and for our fans to be proud."

"I just arrived 10 days ago, I need time, but we're going to try to do our best for our people, especially for our players to be happy and for our fans to be proud."