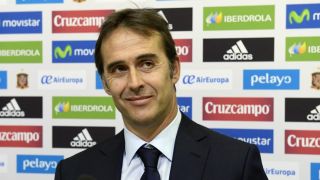 Vicente del Bosque has backed new Spain head coach Julen Lopetegui to get the team on track to challenge at the 2018 World Cup and beyond.

The former Porto boss was named as Del Bosque's successor on Tuesday, beating reported favourite Joaquin Caparros to the role, despite having been linked with the manager job at Wolves.

Del Bosque stepped down following Spain's defeat to Italy at Euro 2016, a result that compounded a disappointing final two years of his spell in charge following their dismal showing at the 2014 World Cup.

But the 65-year-old says Lopetegui, who claimed European Championship titles with the Spain Under-19 and U-20 sides, is a good choice to develop the senior side as they aim to reach the finals in Russia in two years' time.

"I'm sure Julen has the ability and the enthusiasm to take us forward," he told Radio Marca.

"We worked together with the Under-21s and we always had a very close collaboration.

"He's a well-prepared man, with huge enthusiasm. He will know the best way forward, as he did brilliantly with the lower categories."

Del Bosque, who claimed the World Cup in 2010 and Euro 2012 in a triumphant spell in charge, warned his successor of the huge task he is set to face.

"The coach needs everything," he said. "You have to get close to the best, to represent Spanish football, to give the players the right tools to be a team, to have good camaraderie.