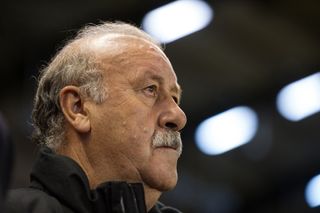 A 2-0 win over Georgia on Tuesday saw the reigning world and European champions top Group I ahead of France.

Del Bosque's contract, which expires at the end of next year's tournament, has been much talked about, but the 62-year-old said it was not on his mind.

"I think there has been too much talk about my contract renewal," he said after the win.

"I'll do whatever the federation wants, there's a long time to go."

Del Bosque talked up the depth he has in his squad and said the way his team moved the ball against Georgia was close to perfect.

Alvaro Negredo scored in the first half of the win, while Juan Mata secured the victory with his goal just after the hour-mark.

"We have a large squad full of very good players that have very little difference between each other – that has helped us not lose that hunger to win every game," he said.

"I thought the pace of our game was better tonight and as a result the movement of the ball was almost perfect, with good interchange from one side to the other.

"We played with a lot of depth and dealt with all their counter-attacks well. Sergio Ramos and (Gerard) Pique were able to prevent any attempts to cause us damage by the opposition."

Del Bosque also touched on Diego Costa's situation and said the Atletico Madrid striker had a decision to make on whether he wanted to represent Spain or the nation of his birth, Brazil.

"We have already spoken with Diego Costa as you know. Everything has been made clear but he has the option of picking the national team he wants," Del Bosque said.

"We are happy to help him to what he wants to do. Whether he feels Spanish or Brazilian, it is his decision to make."