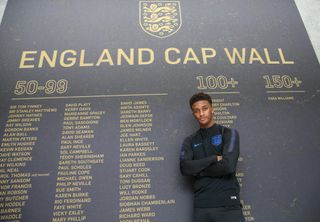 The Leicester winger is out to avenge the Young Lions’ penalty defeat to Germany two years ago.

England fly to Italy on Friday ahead of the Group C opener with France in Cesena on June 18.

Gray is one of three players in the squad – along with Tammy Abraham and Angus Gunn – who reached the last four in Poland in 2017 and he is still wounded from the 4-3 shoot-out loss.

“We threw the game away by being sloppy at a set-piece. That still annoys me because we were so close to winning it,” said the 22-year-old.

“We battered Germany in the semi-final and were 2-1 up when we conceded the sloppy equaliser. Everyone was raving about Spain in the tournament but Germany beat them in the final.

“We were so close. Now I’m fortunate to have the opportunity to go back and this time hopefully go to the end.

“It’s my birthday two days before the final but forget that, I just want to win the tournament.

“Over the last few years from the under-17s upwards we have been winning trophies or at least getting to the semi-finals of tournaments.

“We are trying to make the nation be the best country out there at all age levels. This is the biggest tournament outside of senior level this summer, it is my last Euros, and I want to win it to end my under-21s career on a high.”

England also face Romania and Croatia with just the group winners guaranteed to progress to the last four.

It is Gray’s last shot at under-21s glory and he will turn his attention to breaking into Gareth Southgate’s senior squad after the summer.

“I’ve had a little taste. If you are doing well for your club, the manager will pick you. It’s as simple as that,” said the former Birmingham man.

“That’s good to know and it gives everyone a bit of comfort to know the senior manager is prepared to bring through anyone who is doing well no matter how old they are.

“The next generation is coming through now and they are free to express themselves.

“You see players now like Jadon (Sancho) who plays with real freedom. It’s good for the nation and the future England teams. It is very exciting.”