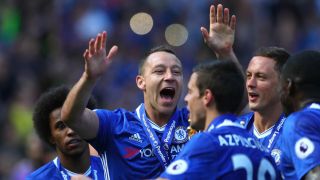 The Premier League champions eased to a 5-1 victory against relegated Sunderland but the action on the pitch was little more than an entertaining sideshow as Terry, whose Chelsea career will end after the FA Cup final next weekend, received an early send off, leaving the pitch in the 26th minute - the number he wears on his shirt - to a standing ovation and a guard of honour.

Terry was visibly emotional when he left the field and when he addressed the fans after Chelsea were presented with the Premier League trophy, marking the fifth time he has lifted it in his glittering 19-year first-team career with the club.

And, as well as thanking manager Antonio Conte, his previous Chelsea bosses and his family, Terry paid tribute to the man whose investment has facilitated the success he has been able to enjoy with the west London club.

Terry said: "Today is one of the most difficult days of my life.

"I've been very fortunate to work with some unbelievable players and managers throughout my career. There's some ex-managers here that I've shared some great occasions with and I'm so thankful to every single one of you.

"We all have to thank Mr Roman Abramovich. I'd like to thank him and the board for being the best owner in world football.

"I'd like to thank my wife and my kids for supporting me in this amazing journey I've had. Thank you, I love you.

"Lastly you guys the fans, the best supporters in the world without a shadow of a doubt. You've given me everything, you've picked me up when I was down. You've sung my name when I've had bad games and disappointed you as well.

"Thank you will never be enough and I'm going to come back here one day and be supporting this team for years to come. From the bottom of my heart thank you, I love you all."