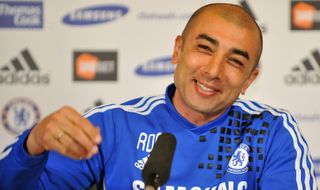 The former Chelsea midfielder and Italy international plied his trade at a local butchers as a teenager, before eventually deciding against the apprenticeship.

"I've never told anyone this before but I started an apprenticeship as a butcher when I was 16," Di Matteo said in the May 2012 issue of FourFourTwo magazine.

"I lasted three weeks and then I dropped out. I couldn’t handle the thought of doing it for the rest of my life, but I’d actually helped out there before becoming an apprentice so I knew how to use the knives.

"My father, who encouraged me to study and not become a butcher, was embarrassed when he went to explain to the butcher I wasn’t going to continue."

The 41-year-old, who made 175 appearances and scored 26 goals for the club as a player, became caretaker manager of Chelsea in March 2012 following Andre Villas-Boas' dismissal and masterminded the west Londoners' first-ever Champions League success.

He admitted his one main regret was selling his home in London after he left the Stamford Bridge side back in 2002.

"My one regret is selling my flat in South Kensington after I left Chelsea," he said. "It’s gone up in price a fair bit since!"