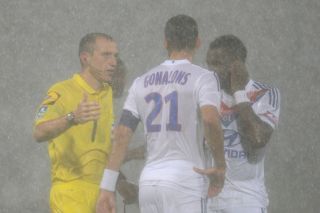 It was Lyon's second defeat in front of their home fans in four days, after the 2-0 loss to Spain's Real Sociedad in the first-leg of their UEFA Champions League playoff, and occurred in dreadful conditions at the Stade de Gerland.

Garde argued Lyon were well worth a share of the points with midfielder Clement Grenier missing a penalty just minutes before Odair Forters secured victory for Reims.

With torrential rain teaming down at half-time, officials decided to suspended the start of the second-half for 35 minutes and when play resumed, Lyon were much improved, according to Garde.

"We are very disappointed after the game we've played; we did not play well in the first half, this is obvious, but we did everything we needed in the second half in order to win the game," Garde said after Saturday's match.

"We were able to create a lot of chances that we could not finish properly and we did some bad movements in the first half but found the solution in the second.

"We also had the chance with (Grenier's) penalty and on their only shot of the second half they scored.

"Without being in a constant danger, we could not control the game as we wanted to.

"I think as a minimum, a draw would have reflected the game more fairly."

Grenier believed his penalty miss was crucial but said the team needed to stay upbeat with the season only just beginning.

"My penalty miss was the turning point of the match," Grenier said.

"Despite losing at home, it is only at the beginning season and we have a return match Wednesday in the Champions League (against Real Sociedad).

"We cannot talk about a nightmare start to the season right now and we will recover."