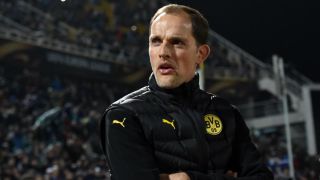 Borussia Dortmund head coach Thomas Tuchel felt his side dominated but lacked fortune in their 1-0 defeat at the hands of Krasnodar in the Europa League on Thursday.

Dortmund - already ensured of progression from Group C prior to their trip to Russia - were beaten as Pavel Mamaev scored the winner from the penalty spot two minutes in.

After Mats Hummels conceded the spot-kick for a foul on Mauricio Pereyra, Dortmund hit the woodwork three times but failed to break down a stubborn home side.

And, having seen his side dominate proceedings at Stadion Kuban, Tuchel said: "The performance was very respectable.

"We produced a very, very good game from the second until the 94th minute and were diligent at pressing and hunting down the ball.

"We have managed to completely dominate Krasnodar, we managed to create plenty of chances and we quite clearly deserved to win this game.

"We dominated the game in a way I would not have expected, the result is paradoxical. I know that you need luck to win games.

"You have seen today that you can only win with luck. We just have to accept it."

Krasnodar and Dortmund are level on 10 points going into their final group games against Qabala and PAOK respectively.