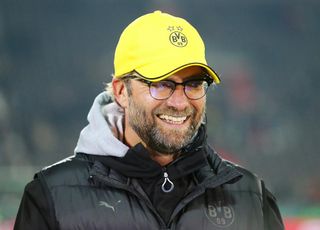 Klopp's men have endured a difficult start to the Bundesliga campaign, with Saturday's 1-0 home defeat to Hannover representing Dortmund's fourth consecutive league loss and a sixth in nine matches this term

That led Klopp to speak of a "critical situation" at the club, but goals from Ciro Immobile, Marco Reus and Shinji Kagawa ensured last season's German cup finalists got back to winning ways by securing a place in the third round.

After witnessing a convincing victory, Klopp expressed satisfaction with the result, if not his side's second-half showing.

"With the result and the strong first half, I am satisfied. With the second half I cannot be satisfied," he added.

"We have not done everything right, but we were clearly dominant. We fully embraced the game, we had to develop certain things.

"We can make it better but today was again a step in the right direction."

Dortmund will face Bundesliga champions and league leaders Bayern Munich next up at the Allianz Arena on Saturday.