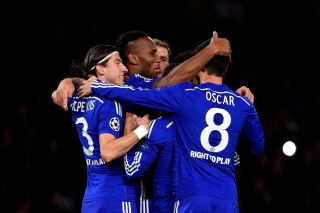 The Ivory Coast international left the club on a high when netting the deciding penalty in the 2012 UEFA Champions League final win over Bayern Munich.

And after returning this season, he was back in the old routine as he scored from the spot at Stamford bridge in Tuesday's Group G clash.

"To finish with a penalty and start again with another penalty is nice," Drogba told ITV.

"I was very lucky with the way we played. We scored two early goals but we didn't stop, we continued to play and that's the result."

Hazard is Chelsea's regular penalty taker these days, but Drogba revealed the Belgium international willingly stepped aside to let the striker end a seven-match drought.

"I wanted to score that goal so I asked him and he said yes," added Drogba. "This is the spirit we have in this team. We share goals and are happy when everyone is scoring. I think they are also happy for my confidence."

Loic Remy opened the scoring before limping off, with replacement Drogba and John Terry then also netting in the first half.

Mitja Viler unluckily deflected a Hazard cross into his own net early on in the second period and the Belgian then bagged a late double himself, the first coming from the spot.

"We have a lot more quality than the previous teams I played with, because the team is younger," added Drogba.

"There is still room for improvement, but the changing room is fantastic and the winning spirit is coming. The desire to score goals and win games is good."

Maribor's misery was compounded when Agim Ibraimi missed a penalty by hitting the post.