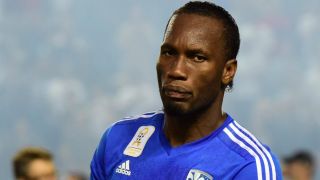 Drogba, 38, turned back the clock with three goals to lead the Impact to a 5-1 rout of the Union in Montreal.

The former Chelsea striker and Ivory Coast captain scored twice in the first half and completed his second MLS hat-trick seven minutes after the interval.

Speaking to reporters afterwards, Drogba – who is set to face Premier League outfit Arsenal in Thursday's All-Star match – said: "This was a special night. Our key players came out strong at the right time.

"The shape of the team was great, and we played well going forward with the ball. We're here to win games, and also to please our crowd."

Drogba added: "It's been a long time since we dominated the ball like that.

"I didn't have to go to the [defensive] side of the field — today I was only focused on scoring."

Drogba improved his season tally to eight league goals, which he dedicated to his late aunty and family.

"It's been few tough weeks recently and I want to dedicate my goals to my aunt who passed away and to my family," he wrote via his official Instagram account post-match. "To my mum, no words will ever be enough to describe how much I love you. Stay strong, I'm with you!!!!

"I also dedicate these goals to Finley this little kid 14 years old fighting a brain tumor and his family. I hope you will like the little video I did for you after the game.

"I wanna finish this message with a prayer for the world and all these people suffering of a loss. Condolences to all the family in the world. Love and light."